Canada must continue to be a spacefaring nation. Here’s why. 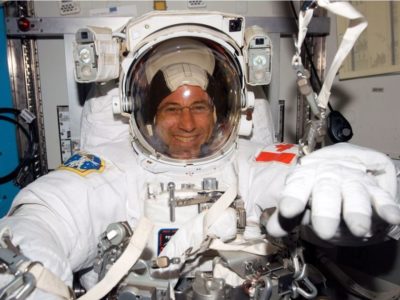 Former Canadian astronaut Dave Williams in his spacesuit getting ready for a spacewalk in a NASA handout photo. Credit: The Canadian Press

But, while our partners are planning to return to the moon in preparation for human missions to Mars, we seem to be struggling with the imperative for Canada to be involved. And yet a choice to reinvigorate the aerospace sector, creating a thriving space program, advances at least four of our national priorities.

• Our commitment to knowledge: Canadian universities do a fabulous job of educating world-class engineers and scientists, but many graduates can’t find employment. Where might the Canadian aerospace sector be today had the Avro Arrow project in Canada in the late 1950s continued?

Its cancellation helped propel NASA to success in the 1960s when some 25 Canadian Avro engineers joined NASA’s Space Task Group, becoming the lead engineers and program managers who helped put humans on the moon. A vibrant space program helps ensure that we have challenging and rewarding work for our best and brightest so they can help build and grow a thriving economy here at home.

• The current focus on innovation: The rigorous requirements of space exploration drive the development of new technologies that improve our quality of life on Earth. Telecommunication satellites connect Canadians to each other and to the world; Earth observation satellites help us to monitor our landmass and coastlines for the protection of our country and our environment. Space research and robotic technology have advanced medical science and transformed the future of surgical care. If innovation is our future, then space exploration is the bridge towards it.

A vibrant space program helps ensure that we have challenging and rewarding work for our best and brightest so they can help build and grow a thriving economy here at home.

• Expanding our competitiveness: Space has been called the final frontier. The new space economy is the next frontier. It’s a $385 billion US market today, forecast by Morgan Stanley to be more than $1.1 trillion US by 2040. Canada now owns about 1.5 per cent of that market; tomorrow, our share stands to be even less unless we position ourselves to take advantage of it.

Other OECD countries are. The United Kingdom, for example, plans to capture 10 per cent of the global space economy by 2030. We should be leveraging our expertise to seize the tremendous economic opportunities that exist in areas like building and servicing satellites; advanced, autonomous robotics; and artificial intelligence — a critical technology that will enable advances in everything from manufacturing to health care.

• Enhancing our role in global leadership: Going to space helps us to better understand that our beautiful, fragile blue planet has no borders visible from space. The greatest lesson of space exploration is the importance of international collaboration. Canada, with its reputation for peacekeeping and as a global mediator, should play its part. After all, we live in a collaborative, multicultural society that values, celebrates and learns from our differences. There are geopolitical benefits to having a voice in the international space community. Ours should be one of those voices.

But over the past two decades, Canada has slipped from eighth to 18th place in terms of investments in space as a percentage of GDP.  Stepping back from space means letting go of our commitment to expanding knowledge; of creating opportunity through innovation; of being competitive in the new space economy; of our role in the international space community.

I have had the privilege of contributing one or two footsteps on Canada’s space journey: One of my proudest memories as an astronaut is of riding through space on the end of the Canadarm2, with the Canadian flag on my shoulder and Canadian logos emblazoned on the Shuttle arm, orbiter boom sensor system, and space station robotic arm. Today, we face a choice: Do we refuel and continue on our space journey or get left behind? #DontLetGoCanada

Dr. Dave Williams is a Canadian astronaut, scientist and physician. He is the author of Defying Limits: Lessons from the Edge of the Universe.

Help secure Canada’s place in space by sending an email to your MP and signing this petition to the Government of Canada.

We use cookies to ensure that we give you the best experience on our website. If you continue to use this site we will assume that you are happy with it. / Nous utilisons des cookies pour vous garantir la meilleure expérience sur notre site web. Si vous continuez à utiliser ce site, nous supposerons que vous en êtes satisfait.Ok