Why David Saint-Jacques Could Be The Last Canadian Astronaut

Canada is staring into a black hole when it comes to the future of its outer space exploration, and if nothing changes, David Saint-Jacques could be the last Canadian astronaut to leave earth.

The country has been without a formal space plan since 1999 and the Canadian Space Agency (CSA) has faced budget cuts and stagnation for just as long, researchers and industry experts say. Even with NASA requesting Canada build a new robotic arm for its next space station project, Lunar Gateway, the federal government has yet to commit to any future projects.

And for Canada, which doesn’t have its own rockets, these types of commitments are the only way for it to secure spots for its astronauts to travel on other countries’ spacecrafts, said Gordon Osinski, a Western University professor and Canada Research Chair in earth and space exploration.

“If we don’t have that ticket for the moon, not only do we not have those industrial investments and jobs, we won’t have a current way for astronauts to go to space,” said Osinski. “No more Canadian astronauts will be a bit of a shock to the Canadian system.”

The CSA told HuffPost the federal government recognizes the “need to lay out a long-term vision for space moving forward and is committed to maintaining Canada’s continued activity in this evolving industry.”

“Canada has been a global leader in space robotics for decades, and is a recognized powerhouse in artificial intelligence,” CSA spokesperson Marie-Andre Malouin said. “We see these two sources of national expertise and pride coming together to enable human exploration of deep space: the space robots of the future will have to work with minimal human help, using artificial intelligence to make decisions.”

But if Canada wants to be competitive, it must invest in its space industries more than it currently does, experts say.

Out of the G8 countries, Canada spends the least amount on its space program and the second lowest per capita, according to a 2017 report from the University of British Columbia (UBC). It provides about $16 million a year towards space exploration missions and technology, and about $250 million in base funding for its space agency — $50 million less than in 1999.

It’s a missed opportunity, said the UBC report. Canada is a world leader in the aerospace industry, and every $1 billion invested into space innovation generates an additional $1.2 billion in economic activity. The Canadian space sector’s annual revenue is more than $5 billion mostly from satellite operations and services and it employees about 25,000 Canadians. The UBC researchers recommended a $1-billion investment in a structured space program over the next 10 years.

The global space and satellite markets are expected to grow from about $350 billion now to trillions of dollars by 2030, said Ryan Anderson, president and CEO of the Satellite Canada Innovation Network, a not-for-profit organization that drives growth for Canada’s space industry. The network is also a member of a coalition of 60 industry partners called Don’t Let Canada Go, which is raising public awareness and lobbying the federal government to increase the space budget in 2019.

“As other nations have been increasing their investments and new nations entering the sector, Canada is rapidly losing ground,” Anderson said. “The coalition formed to raise public awareness of the situation and the implications of not reversing the trend.” 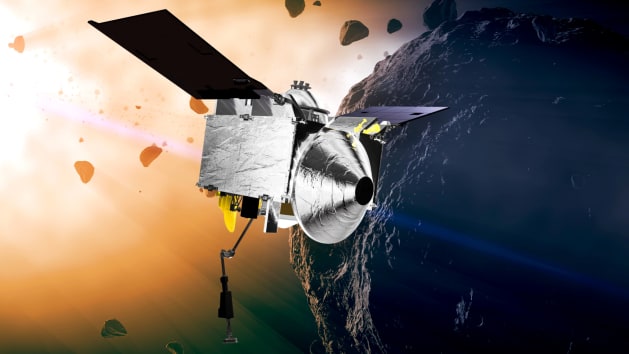 ASSOCIATED PRESS – This illustration provided by NASA depicts the OSIRIS-REx spacecraft, equipped with a Canadian laser scanning system, at the asteroid Bennu.

There appears to be support for Canada’s space program. A petition to the House of Commons to develop a space strategy and increase funding has been signed by more than 3,500 people. A poll from September found that 84 per cent of Canadians are in favour of developing the country’s space sector, and the majority said it would be a good idea to increase investment in satellite communications, space science, space robotics and international space missions, according to Ipsos. It surveyed 1,602 Canadians over the phone in June, yielding a margin of error of 2.45 per cent, 19 times out of 20.

Between now and February, Canada will mark a number of space innovation achievements, which Osinski said are “bittersweet” because they stem from previous commitments, not matched for the past decade.

On Monday, the same day Saint-Jacques became the ninth Canadian astronaut to venture into space, a NASA asteroid probe equipped with a Canadian-made laser system arrived at its destination. The laser will scan an asteroid, create a 3D model, provide scientists with “unprecedented” information about its surface and help determine the best spot to take a sample from, according to the CSA’s website.

The CSA will also see the launch of three made-in-Canada satellites in February 2019 to monitor and provide data on ecosystems, agriculture, natural disasters and climate change in Canada.

Meanwhile, Canada has failed to join recent NASA missions including the launch of a Mars rover in 2020, and has been non-committal on whether it will build the robotic arm for NASA’s Lunar Gateway, a new space station to orbit the moon as early as 2024 that will serve as stepping stone to deep space. The new arm will cost about $2 billion to build over at least a decade, said Osinski. The International Space Station will shutdown by 2028.

“Canada’s participation in the Lunar Gateway is still being discussed by the Government of Canada,” said the CSA’s Malouin. “We are advancing technologies that are needed by the partnership in areas of strength for Canada, like robotics.”

If Canada doesn’t act fast, it can also say goodbye to being part of the next stage of space exploration including asteroid mining and eventually human settlement on Mars.

“Space is opening up at incredible speed because of technological advances,” said Michael Byers, University of British Columbia professor, focusing on outer space and Arctic sovereignty, and Canada Research Chair in global politics and international law.

Help support the #DontLetGoCanada campaign by sending an email to your MP and signing the petition to the Government of Canada.