The meteoric rise of grassroots rocketry in Canada

Space internationally is changing fast, with new companies and new national players rising to prominence and challenging the status quo.  Unfortunately, it’s no secret that Canada, as one of those traditional spacefaring nations, has not been doing nearly enough to adapt and we are increasingly falling behind.  While other countries have been increasing their investment in space for years, ours has been falling.  For the sake of our country and our economy, we need to do much better.

Our lack of a well-funded long-term space strategy has indeed been a major challenge, but there is another endemic problem in Canada that combines with this to seriously hold us back.  It’s one that cuts to the heart of how we create an ecosystem where innovation can thrive.

When most people think of space in Canada, they think of a few niche areas.  There’s robotics, exemplified by the iconic Canadarm.  Remote sensing, exemplified by the Radarsat missions.  Telecommunications.  And of course our exceptional astronauts.  But historically, there has been a strong reluctance to support anything outside of certain niches like these.  While there’s nothing wrong with playing to one’s strengths, it can all too easily lead to a very self-limiting mindset that says “we’re too small; we need to stick to what we’ve always done.”  This is the very sort of mindset that causes us to fail to recognize new opportunities, and fail to perceive that the world is changing around us and respond to that change. 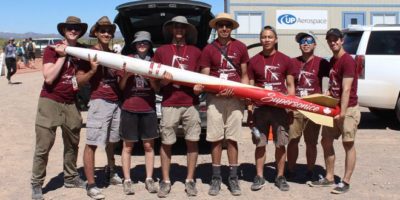 There are few places where this is more dramatically seen than in the meteoric rise of grassroots rocketry in Canada.  While work in rocketry has never been completely absent, it has certainly not been one of our traditional space technology niches.  Yet a rapidly growing number of students and amateurs – grassroots innovators – have for the last several years been challenging that.  Inspired by what they see happening elsewhere with innovative companies like SpaceX, Blue Origin, Rocket Lab and others, they are no longer satisfied with being told that they can’t do that here.

Where just a few years ago there was almost nothing, today there are around 20 university rocket teams across the country, representing well over 600 active students.  All are building sophisticated vehicles and pushing the technological envelope in everything from composite structures and supersonic aerodynamics to hybrid and liquid rocket propulsion.  And they are dominating at major international competitions.  At this past summer’s Spaceport America Cup in New Mexico, Canadian teams won three out of the four categories they competed in, as well as placing first AND second in the payload challenge, and winning first overall in the competition.

This showing is all the more impressive given that Canadian teams made up less than 10% of the entrants in the competition.  What’s more, this level of excellence has been consistent.  Talk about punching above our weight – all this in an area of space technology that, supposedly, “we don’t do here”!

Yet the experience is bittersweet for them.  They come home to a country that doesn’t support them, where they frequently don’t even have the opportunity to launch their more advanced rockets.  Far too often, they are forced to either abandon their passion, or leave the country to pursue opportunities abroad.  We are losing some of our brightest, most talented and motivated individuals due to a lack of support and opportunity.

When there is this much raw passion and demonstrated talent, yet virtually no support to help it thrive, it points to a serious disconnect.  We want to consider ourselves a nation of innovators, but innovation does not happen in a vacuum.  It emerges most reliably when you have an ecosystem that is conducive to it, when policy, programs and avenues for support exist that are nimble, flexible and responsive to the talents and interests of innovative Canadians and the opportunities in a constantly evolving global market. This can be facilitated if government is willing to show real leadership and demonstrate the same kind of innovation and vision in its policy and programs as the innovators it seeks to empower.

As I write this, work is underway to create the inaugural Launch Canada rocket innovation challenge (#launchthenorth), the first-ever major Canadian rocket competition that aims to finally give Canada’s student rocketeers an outlet to pursue their activities here in Canada, take them to the next level, learn, collaborate and compete.  At the same time it will provide a highly visible showcase of the kind of Canadian engineering excellence that they’ve been repeatedly demonstrating internationally but until now has been largely unseen in Canada.

We’re creating this competition because we’ve seen the talent and the potential of these grassroots rocketeers, but to truly unleash this talent, we need help.  We have driven, talented young rocketeers across this country who believe in what they’re doing and where they can take it.  It’s high time we as a nation started supporting them and showing them that we truly believe in their potential to achieve amazing things, right here in Canada, and it’s high time that we had a bold, comprehensive space strategy that recognizes the value of non-traditional innovators like them and non-traditional technology areas like theirs, and helps to facilitate that support. Help us #LaunchTheNorth !

Help secure Canada’s place in space by sending an email to your MP and signing the petition to the Government of Canada.