Despite an initially lukewarm response by at least one federal cabinet minister to an invitation by the head of the U.S. space agency for Canada to send astronauts to the moon, Transport Minister Marc Garneau – who was the first Canadian in space – appears to be sold on the concept.

NASA’s chief administrator Jim Bridenstine made the pitch during a recent stop in Ottawa where he was attending a conference hosted by the Aerospace Industries Association of Canada.

In a keynote address to the membership, Bridenstine said NASA is currently in the process of setting up a “Lunar Gateway,” a space station that would be sent into orbit around the moon beginning in 2021.

“If Canadians want to be involved in missions to the surface of the moon with astronauts, we welcome that,” Bridenstine told journalists.

Federal Innovation Minister Navdeep Bains reacted to the offer by saying, among other things, that the government is still working on a long-awaited and multi-dimensional space policy which will be made public before the federal election next fall.

In a recent interview with Newsfirst Multimedia, Garneau suggested Ottawa is pondering NASA’s offer with more earnestness than the Innovation Minister’s response suggested. “It’s something that we’re looking at very seriously,” he said regarding NASA’s offer.

“Because, like the International Space Station which involves Canada and the U.S. and Japan and Europe and Russia, what the next big thing may be is the Lunar Gateway and this would be a station orbiting around the moon. And it would be a place you’d go to and then go down to the moon and start to work and do things on the moon.

“You know we’re been to the moon,” Garneau continued. “But back then in the ‘60s it was really because it was a race between the U.S. and the Soviet Union – who could get there first. And the Americans got there first. But it wasn’t really to go there to do science or to do other things. But now the time has come again to go back there. 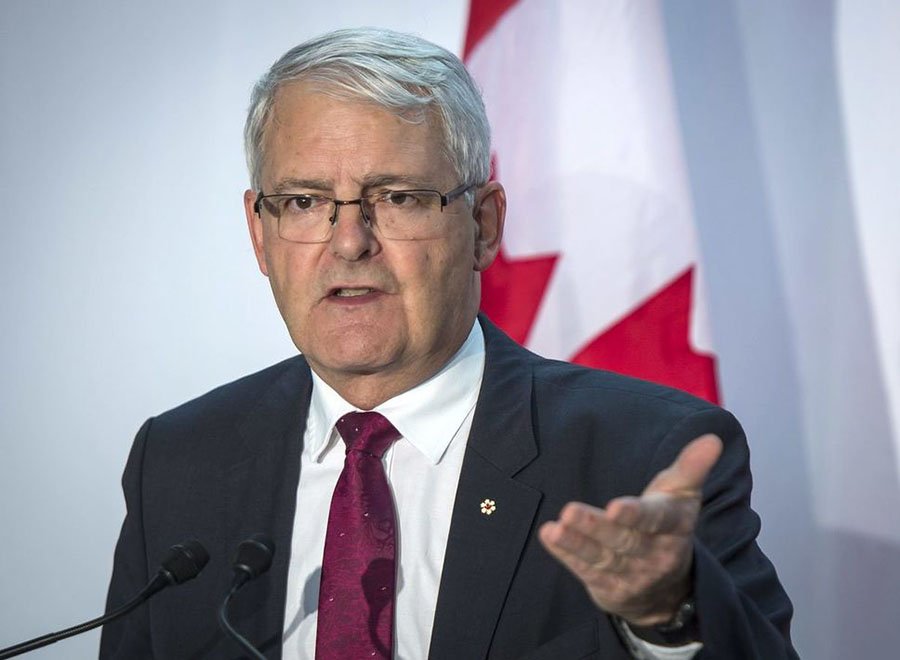 “There’s more science to be done on the moon to understand it,” said Garneau. “It can be an observatory, because it doesn’t have an atmosphere. It can be a place to prepare for eventually going to Mars. So you would try out technology and equipment on the moon, which is only three days away. And then, once you’re comfortable with it [equipment], that it can be used on Mars, then you eventually go to Mars.

“So this is a big project. The Lunar Gateway it can’t be done by just one country. And Canada has lots of expertise that we can contribute and we’re looking at it very seriously. So we’ll see what comes out of that. But our interest is a very strong one.”

Garneau said that “if it goes ahead,” Canada’s involvement in the project would be supported financially by the federal government, although he pointed out that private investors are increasingly becoming involved in space exploration ventures.

Regarding the United States-Mexico-Canada Agreement which Canada finished negotiating with the U.S. in September amidst much controversy, Garneau was pleased overall with the outcome.

“This is now going to provide some long-term stability in making the U.S. and Mexican markets open just like they were before we negotiated,” he said.

Asked by Newsfirst Multimedia whether the agreement ended up working out better than had initially been thought, Garneau responded, “Certainly the original presentation we got from the United States and what they wanted out of this deal is quite a world away from what we ended up with.

“Because we said that, no, we’re going to stay at the table here, but there are some things that are very important for Canada and we’re not going to accept any deal. It’s got to be a good deal for Canada.

“I think we negotiated a good deal for Canada,” added Garneau. “And I think that we’re already seeing investments now flowing back into businesses that deal with the United States and Mexico. Because there’s a sense now that we have long-term stability because we arrived at a deal after fourteen months.

An insight into Trump gov’t

“Of course, it still has to be ratified. But essentially people are feeling confident enough now that they’re beginning to put more investments in, whilst they were holding back while the negotiations were underway.”

Garneau was asked whether the USMCA negotiations provided him with any insights as to what the current U.S. government led by President Donald Trump is like.

“Well, you know, I guess when you boil it down, when two or three sides are negotiating it’s natural for each of them to want to get the best deal for themselves,” he said. “And some of the negotiations were tough with the United States. But were also very determined to make sure it was a good deal for Canada.”

Help secure Canada’s place in space by sending an email to your MP and signing this petition to the Government of Canada.