Why Canada mustn’t step back from space exploration

Canada is a nation founded by explorers. As a child, I enjoyed reading stories of our Indigenous Peoples, the Vikings, La Vérendrye, Sir Alexander Mackenzie and others. Their exploits are vital threads of Canada’s national fabric; their personality traits – vision, perseverance, courage – distinguished early Canadians from other world citizens. Their ambition inspired me, as did John F. Kennedy, who declared that we explore space “not because it is easy, but because it is hard.”

Exploration, particularly the exploration of space, became important to me and I began to fashion an educational path that would lead to a career in space, and that would challenge the best of my energies and skills. My eventual career did take me to my physical, intellectual and emotional limits on a regular basis, and it took me to space, where I proudly wore our maple leaf. 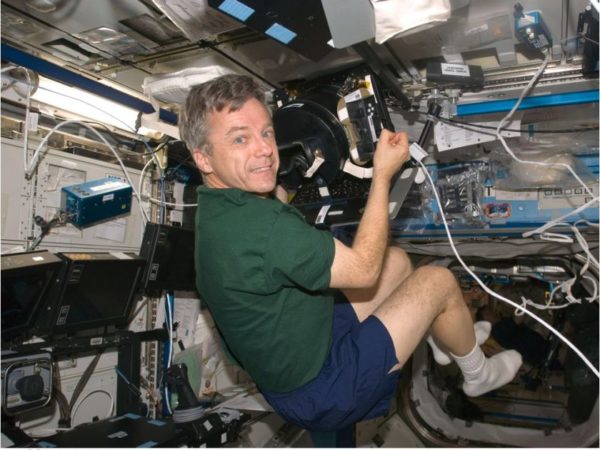 June 30, 2009 — Bob Thirsk on the International Space Station works on an experiment that tests how astronaut perceive the concepts of up and down in Zero-G. (Credit NASA)

I was privileged to pursue a fulfilling career in space at a time when Canada had a vigorous, successful program that inspired the public. This golden era no longer exists. The spirit of exploration that characterized our young nation, a critical core competence that provided Canada with a competitive edge in the global economy and that distinguished our culture, appears to be waning.

Our national space program is surviving, but not thriving. Our recent achievements in space have been good, but not audacious. Canada no longer pulls its weight in the world space community. Our minimal contributions to recent international programs give us little voice around the table. We have become followers.

I spend much of my time now nurturing the next generation of young space leaders. It is heartbreaking for me when I hear that our young leaders are unable to find career challenges that match their ambitions and abilities. The best and brightest are leaving Canada to follow their space dreams elsewhere. We are slowly losing national capacity.

These are significant losses. A Canadian role in space exploration is not just about national pride. Space exploration brings this country significant economic returns, scientific payoffs and new technologies. Besides these pragmatic benefits, space exploration also motivates students in their STEM studies and inspires our society to take on other audacious challenges – perhaps its greatest value.

To remain a productive and innovative nation playing a significant role on the world stage, Canada needs to nurture our modern-day explorers and a national culture that pushes back 21st-century frontiers.

I am calling on the government of Canada to restore support for and pride in our national space program, allowing Canada to regain its role as a credible leader within the international space community – a role that matches our heritage as a nation of daring explorers.

Specifically, I recommend that the government implement the recommendations of the ISED Space Advisory Board’s 2017 report; and approve the Canadian Space Agency’s new space strategy and restore adequate funding starting in Budget 2019, as a means to stretch our national capabilities and rally our citizens.

The first human exploration missions to Mars will take place in the 2030s. Even now, international space agencies are collaborating on the design and development of the Lunar Gateway – the future deep space outpost that will serve as a gateway to the lunar surface and to Mars. But so far, Canada has not joined the partnership and time is running out. It was through past partnerships in the space shuttle and the International Space Station programs that Canada secured its leadership role in space robotics. It is also what provided our Canadian astronauts, including me, with opportunities to serve in space.

The brave astronauts who will someday lead humanity’s exploration of deep space are alive today and probably in high school or university. Without a reinvigoration of our space program now, Canadian youth will not be among them.

Let’s ensure that Canada’s role is significant, our voice is heard, and our astronauts are present when the spacefaring nations explore deep space in the coming decades. Because, if there is one country in the world that should know something about exploration, it is Canada. #DontLetGoCanada

Dr. Robert Thirsk, O.C., O.B.C. is a former Canadian astronaut. He has spent 205 days in space as part of space shuttle and International Space Station missions.

Help support the #DontLetGoCanada coalition by sending an email to your MP and signing the e-petition.